What is the MARPE technique: when crossbite is not treated in time? 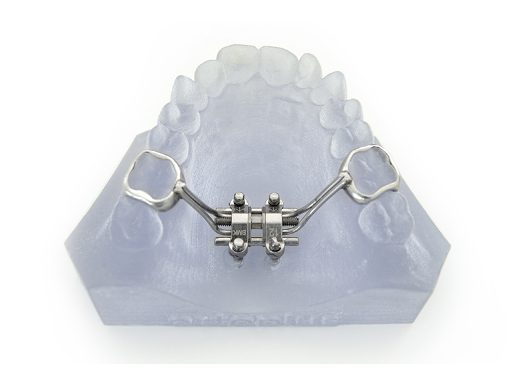 We have already discussed in previous articles the importance of early intervention and orthopaedics in cases where palatal disjunction is necessary to prevent crossbite.

These crossbites can lead to dental crowding and malocclusions that end up leading to mandibular deviations or disorders of the articular system.

However, today we are going to approach it from the opposite perspective because...

What happens if crossbite is not treated in time?

Up to approximately 12 years of age, this expansion of the maxillary bone can be achieved without major complications, due to the fact that the palatal suture - the one in the middle of the palate - allows us to separate it and for new bone to form. However, after the age of 12, expansion is more unpredictable and treatment in adults has a series of differences with respect to that of growing children, as the maxillary bone is already formed, the sutures are harder and palate expansion is more complicated.

In these cases where, for whatever reason, early treatment has not been possible, the traditional way to solve this problem in adults has been surgery. SARPE (Surgically Assisted Rapid Palatal Expansion). This is a rapid expansion through orthognathic surgery of the maxilla. It is an effective but invasive treatment for the patient, who must undergo surgery, with the risks associated with these interventions and the postoperative recovery involved.

However, science advances, as we like to repeat in this blog, and all its branches advance with it. Orthodontics, of course, is not left behind and in recent years an innovation has appeared called MARPE.

What is MARPE and how does it work?

MARPE, which stands for Microimplant Assited Rapid Palatal Expansion, is based on an appliance or device that is attached to the palate by means of micro-screws. This device allows us to apply the necessary forces to expand an adult maxilla, as the micro-screws are anchored directly to the bone, rather than to the teeth, as in the case of palatal disjunctors used in orthopaedics. This allows us to generate more force without fear of damaging teeth and is less invasive than surgery.

With regard to how it works, the first thing we need for a MARPE treatment is, although it may seem obvious, to make the device. Each one is unique and adapted to the patient's bone anatomy, so it requires a CBCT X-ray and a 3D scan to make the necessary MARPE appliance. It then needs to be fixed. Under local anaesthesia, it is fixed to the palate using 2 to 4 guided mini-screws according to the digital planning.

Once fixed, the patient will perform the activations at home for the time agreed with the orthodontist. The appliance is activated by turning a screw, so that the palate widens gently and progressively. As the palate begins to expand, the patient will notice the appearance of a small diastema between the central incisors, as well as an improvement in nasal breathing due to the enlargement of the nostrils.

In summary, the MARPE technique is an alternative for patients with transverse defects who have completed the growth stage, avoiding the need for surgical treatment and the complications that this entails.